Integrity and loyalty, in our brand

Access Hire Middle East are still hiring and delivering, and with modified processes, we are here to help your business stay safe. Click to see our COVID-19 sanitization program.

Halliburton signed a three-year contract to provide oil field services that will help the Saudi Arabian company produce natural gas trapped in shale and tight sands, also known as unconventional resources, in several areas — North and South Arabia, Jafurah and the Rub’ al-Khali, or the “Empty Quarter” — according to a May 27 press release and Saudi Aramco’s website. Work is expected to begin in June.

Saudi Aramco was expected to begin producing natural gas in March from the Jafurah basin, which could rival the Eagle Ford, Bloomberg reported at the time. Last summer, CEO Amin Nasser said the company had plans to spend $300 billion over the next 10 years for projects related to maintaining spare capacity for oil as well as boosting exploration and production of conventional and unconventional gas, per Bloomberg. 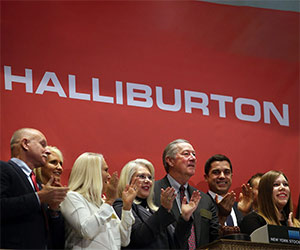 The New York Times reported that Saudi Aramco has awarded $4.5 billion in contracts over the past year to international oil service companies to increase its gas production, but many failed to recover the gas at an economical price. S&P Global Platts also reported that it’s still uncertain whether the resources are recoverable at a cost that is low enough to make production viable.

Yet, Saudi Aramco appears confident in Halliburton “as a leader in unconventional resource development,” and Halliburton is ready to help the company, per the release.

“We are excited to apply our broad knowledge, efficiency and experience in unconventionals from Halliburton’s leadership position in North America to Saudi Arabia,” Jeff Miller, president and CEO of Halliburton, said in the release.

“This is a great opportunity to provide a tailored application of Halliburton technology, logistics management and operational excellence to maximize Saudi Aramco’s asset value and deliver optimal recovery.”

This isn’t the only deal Saudi Aramco has made to achieve Vision 2030 and its IKTVA program.

Saudi Aramco and Paris-based Total SA (NYSE: TOT) also signed an MOU in April to build a giant petrochemical complex in Saudi Arabia. That $5 billion project would be built near the existing Satorp refinery — a joint venture between Saudi Aramco and Total — in Jubail.

And proceeds from Saudi Aramco’s long-awaited initial public offering are expected be used for investment in refining and petrochemicals, rather than in exploration and production, CEO Amin Nasser told Bloomberg in March. That IPO could be held as soon as the second half of this year, per Bloomberg, but it likely could be delayed until 2019, per the Financial Times and others.

Meanwhile, Halliburton — and two other Houston-based oil field service companies — saw lower revenue in the first quarter. Halliburton reported revenue of $5.74 billion, down from the fourth quarter’s $5.94 billion. The company was also dealing with issues in North America’s rail network, which it uses to ship frack sand to well sites. Luckily, the company’s rail woes are behind it, Miller said in the company’s first-quarter earnings call.